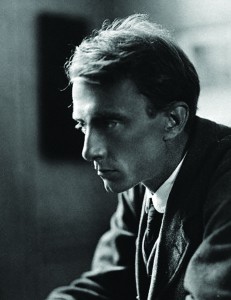 Edward Thomas, (1878-1917) was a poet, essayist and writer who focused on the English countryside for his inspiration. His early career was spent working solely in prose, as a reviewer of poetry, writing literary criticism and topographical books — his need to support his young family and wife resulting in him sacrificing creative writing for this hack work.

In 1913 he met the American poet, Robert Frost, and the two men developed a great friendship, taking long walks in the countryside together, meeting up with fellow poets and sharing ideas. Later, Frost wrote of their time together: ‘I never had, I never shall have another such year of friendship.’

It was during this precarious time, as World War I began, that Frost persuaded Thomas to begin his life as a poet unlocking his true talent. Thomas was to write over 140 poems in just two years. In July 1915 Edward Thomas enlisted and in September 1916, began training as an Officer Cadet with the Royal Garrison Artillery; by November he was commissioned Second Lieutenant. He volunteered for service overseas and was sent to northern France, where he was stationed at Le Havre, Mondicourt, Dainville, and finally at Arras. On the first day of the battle at Arras, Easter Monday, 9 April 1917, Thomas was killed by a shell blast. He was buried the following day in Agny military cemetery.

‘Adlestrop’ was published in the New Statesman three weeks after his death and has ever since become one of the nation’s favourite poems. Ivor Gurney called it ‘nebulously intangibly beautiful’.

Edward Thomas is now widely thought of as a major English poet and his poetry with its directness and simple rhythms and language, remains as moving and powerful as when it was first written. His early admirers included Walter de la Mare and Ivor Gurney, and great poets such as Ted Hughes and R.S. Thomas have all spoken of his influence on their work.

The literary scholar F.R. Leavis singled him out as ‘an original poet of rare quality’ and Andrew Motion, a Poet Laureate, has nominated ‘Old Man’ as his favourite poem ‘because it so brilliantly proves, as do all his poems, that you can speak softly and yet let your voice carry a long way’.

One thought on “Edward Thomas”

Yes. I remember Adlestrop - The name, because one afternoon Of heat the express-train drew up there Unwontedly. It was late June. The steam hissed. Someone cleared his throat. No one left and no one came On the bare platform. What I saw Was Adlestrop – only the name And willows, willow-herb, and grass, And meadowsweet, and haycocks dry, No Continue Reading →

The pretty Cotswold village of Adlestrop invites you to spend a special Sunday afternoon enjoying its mix of attractions. Noted for its literary associations with Jane Austen and the poet, Edward Thomas, Adlestrop opens up for this popular annual event on Sunday 10 June 2018 from 12.00 - 5.00 pm. The Fun Dog Show at 2’o’clock will be judged Continue Reading →
The Audit for the year ending 31 March 2019 has been concluded satisfactorily. Please click to download the 'Certificate of Exemption 2019' and 'Audit of Accounts 2019'.