On 23rd June 1914 The express train from Padington stopped briefly at Adlestrop Railway Station.  It was about 11:50 and the poet Edward Thomas observed the scene around him and made a few notes.  One of Britain’s favourite poems was born.  100 years later the Village of Adlestrop celebrates the aniversary.  Robert Hardy very kindly agreed to read the Poem in front of the Adlestrop railway sign – the only remaining part of the old station. 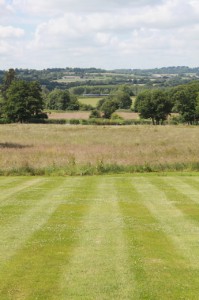 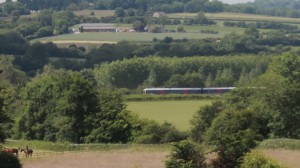 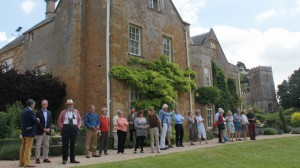 At around 11:30 the villagers gathered on the patio of Adlestrop House to watch the special aniversary train stop close to the site of the old station.  For the benefit of those gathered, Stuart Dewar read the address and poem that was being read out on the train.

It was a very special moment with weather condtions and wildlife sounds that perfectly reflected the words of Edward Thomas’s Poem.

Here are a couple of YouTube videos that capture the event from the bridge and on the train.

Yes. I remember Adlestrop - The name, because one afternoon Of heat the express-train drew up there Unwontedly. It was late June. The steam hissed. Someone cleared his throat. No one left and no one came On the bare platform. What I saw Was Adlestrop – only the name And willows, willow-herb, and grass, And meadowsweet, and haycocks dry, No Continue Reading →

The pretty Cotswold village of Adlestrop invites you to spend a special Sunday afternoon enjoying its mix of attractions. Noted for its literary associations with Jane Austen and the poet, Edward Thomas, Adlestrop opens up for this popular annual event on Sunday 10 June 2018 from 12.00 - 5.00 pm. The Fun Dog Show at 2’o’clock will be judged Continue Reading →
The Audit for the year ending 31 March 2019 has been concluded satisfactorily. Please click to download the 'Certificate of Exemption 2019' and 'Audit of Accounts 2019'.